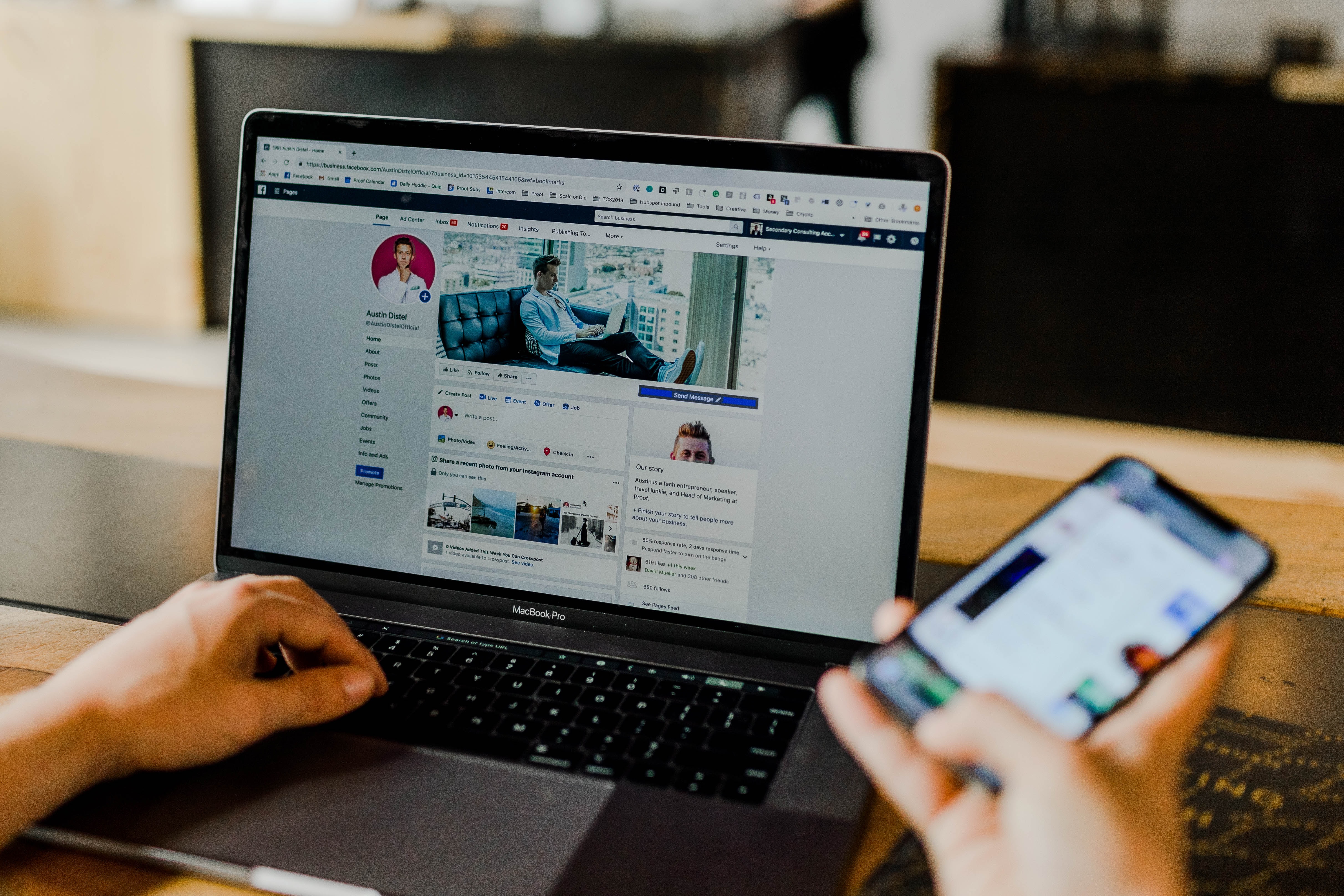 in Media Market Research by Angelfish

We’ve been recruiting participants for media market research projects since our inception here at Angelfish Fieldwork.

In that time, we’ve had the pleasure of working with some of the world’s most renowned media companies, such as the BBC, Channel 4, Sky and Universal Music Group, and have subsequently built up a strong reputation for media market research recruitment across a diverse range of audiences.

As our experience recruiting participants for research in the sector has grown, so has our own interest in all things media, and media consumption.

… and our interest only grew during the coronavirus pandemic! With the UK population confined to their homes for the majority of their time, media became one of the main ways that people kept themselves busy and passed the time.

This was when we conducted our first Lockdown Life: Media research project, from which we uncovered the following (and very intriguing) insights: 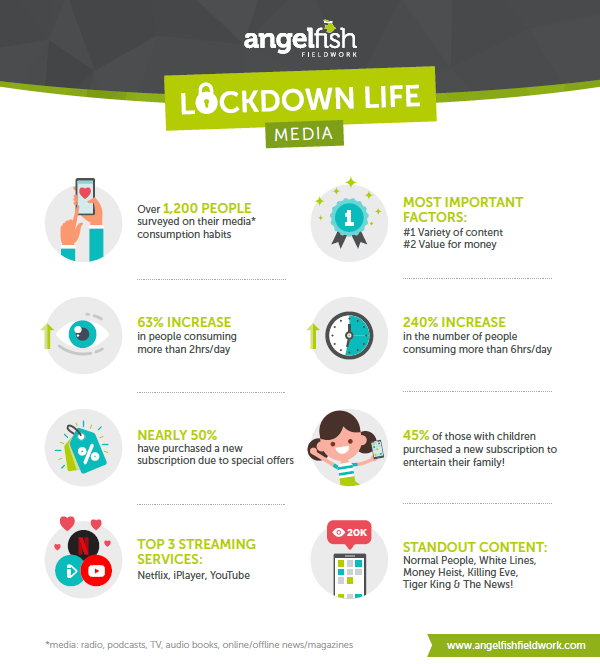 As life has gradually returned to (almost) normal, we wanted to dig a little deeper into our findings, exploring how the pandemic has changed media consumption, and whether this change has stuck.

We surveyed 1,000 amazing individuals in our community to gather their views, experiences and opinions on media consumption before, during and after the pandemic.

Read on to find out more about our pandemic media consumption research study...

What we wanted to find out...

In light of the coronavirus pandemic and our own knowledge and expertise in the media market research sector, we wanted to find out:

1. To kick off, here’s a bit of background from other sources:

1. Media consumption will likely have changed due to the pandemic, mainly as a result of people:

2. There will be a mix of those who stuck with the same kinds of media (most likely those looking for comfort and familiarity), and those who tried new things (those who are more easily bored).

3. There will be a change within the methods through which people consume media

4. Demographics, namely generation, will have an impact on the above.

5. In the “new normal,” these changes are likely to remain for the long haul.

3. Then it was over to our fantastic community to fill in any gaps for us!

What we discovered (at a glance):

Gen Z: Social media was consistently the most popular. However, during the pandemic, they ventured into films and video games more.

Millennials: Films were consistently the most popular; however, this decreased along with social media usage.

Gen X: TV was consistently the most popular; however, this this reduced greatly while social media usage increased.

Boomers: TV was consistently the most popular, although this also reduced significantly compared to before the pandemic.

Will these changes stay for the long haul?

We think yes – particularly if working from home remains in place!

So... how many of our first thoughts were correct?

1. Media consumption will likely have changed due to the pandemic, mainly as a result of people:

Needing a cure for boredom

Boredom was the biggest reason for people consuming media both before the pandemic, and since the lockdowns. Interestingly though, this neither increased nor decreased post lockdown lifting!

However, as shown in our word cloud and participants’ quotes below, boredom during the pandemic did seem to cause a significant push towards greater media consumption:

Prior to the pandemic, escapism from the real world was the third most popular reason for consuming media at 14%. This rose to 19% after the pandemic. 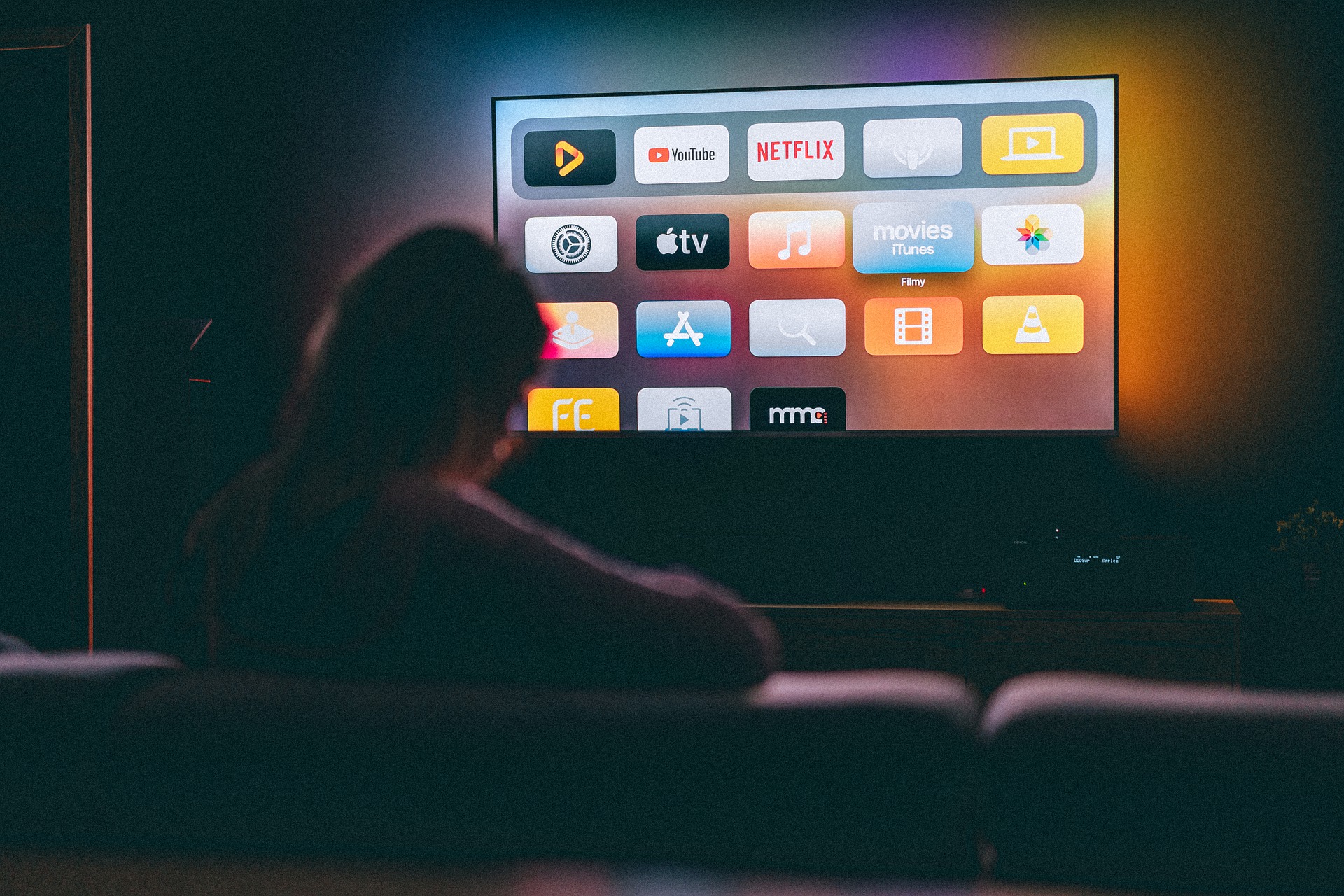 Using media to feel better was the lowest selected reason for participants’ media consumption before the pandemic at 4%. This increased slightly to 6% following the pandemic, overtaking fear of missing out and because someone had recommended something:

One of the standout elements of this was feeling less lonely:

Interestingly, however, some participants quoted that the increase in media consumption had made them feel worse, so they either changed their habits or removed them altogether:

While the factors above increased (or stayed the same) as a result of the pandemic, some actually decreased. For example, we found that:

The only other factor that remained the same was “To get inspired” stayed at 8%.

When asked “Do you think the pandemic has affected the way we consume media? And why do you think this?”, a number of other significant contributors came up, including:

Those who had less time on their hands also indicated that things were the same as they had been before, further demonstrating time as a significant factor:

Similarly to having more time, people indicated that working from home had an influence on their increased media consumption:

Keeping informed on what is happening in the world

“News” appears in our word cloud – and it’s unsurprising when you see the responses about it!

… And many responses revealed a mix of all the above factors, some intertwining with each other!

The pandemic certainly has had an impact on people’s media consumption; both in terms of them using it more frequently, and in their overall choices.

2. There will be a mix of those who stuck with the same kinds of media (most likely those looking for comfort and familiarity), and those who tried new things (those who are more easily bored).

Interestingly, TV consumption reduced by 5% and film consumption increased by 3% across the board, whether participants described themselves easily bored or not, or liked trying new things or not – in fact, the score for watching films doubled for those who didn’t like trying new things, which goes to show how much the pandemic has affected our media consumption in this area!

Nostalgic people’s (those more inclined to seek familiarity) media consumption methods stayed the same; however, same as other groups, their preference for film increased – in this case by 3%, while TV decreased by 6%.

As an interesting side note, “fear of missing out "decreased in those who described themselves as having FOMO from 14% to 10% – escapism and boredom seemed to increase as drivers here!

From the responses we received, there was indeed a mix of people sticking to the same things – however, it appeared that some were consuming more of those things:

and those who tried something new:

3. There will be a change with the methods through which people consume media

We asked about the kinds of streaming services people used before the pandemic, during lockdowns and now, as well as the types of social media they used in those same periods.

Use of Amazon Prime Video, Apply TV+, Disney+, Netflix, BritBox, DAZN and Freeview increased across all participants; in fact, the only ones that decreased were Hulu and Hayu. This confirms that streaming services saw a boom in popularity as a result of the pandemic.

At a glance, Hayu has a one-star rating on TrustPilot, and Hayu 1.5, whilst Netflix, Disney+ and the other services named have much better reviews across the board, which may explain this tip in the balance. This goes to show the importance of the user experience! 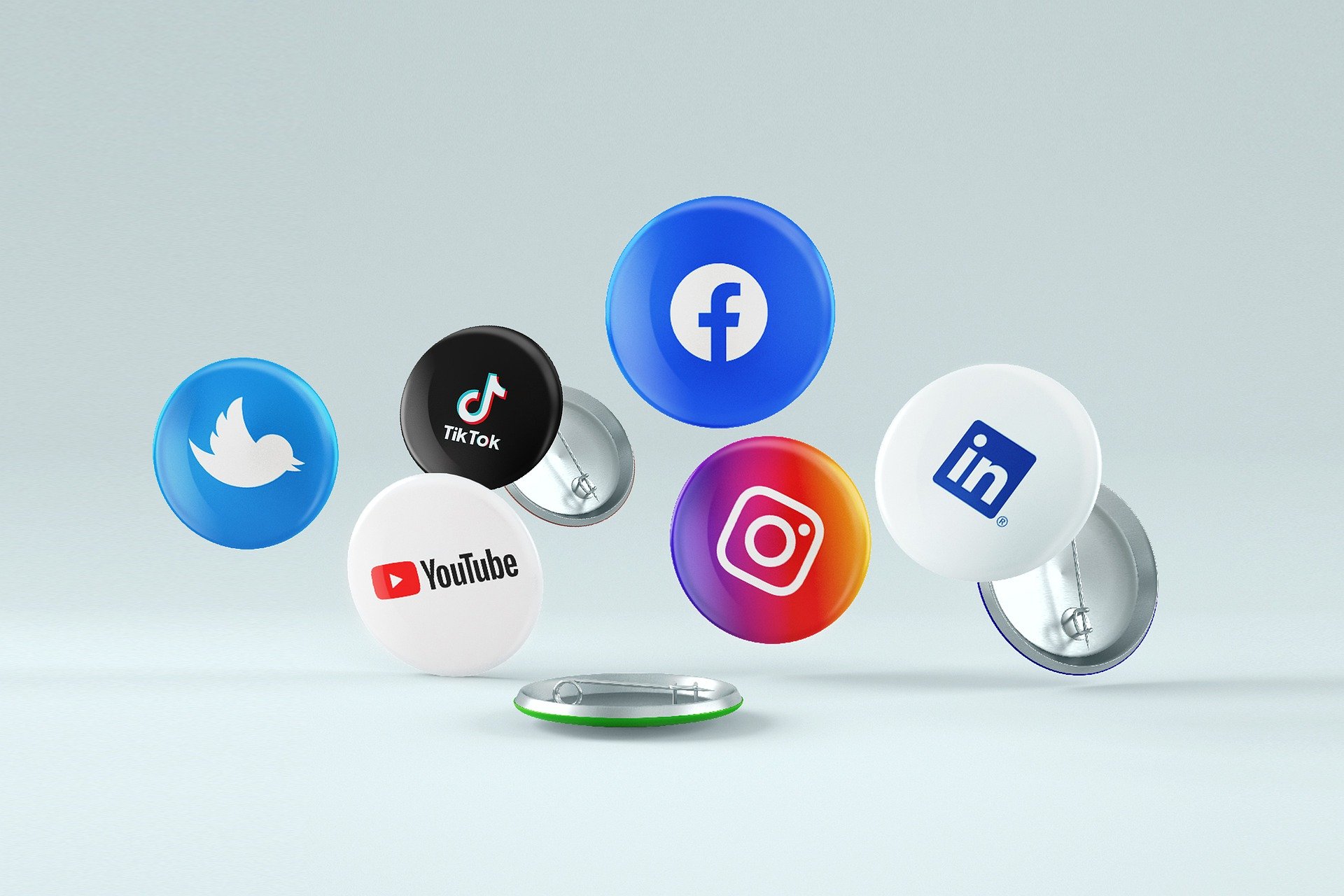 “Keeping in touch with friends” remained the most popular reason for using social media both before the pandemic and now; however, this did reduce from 64% to 51%.

“Sharing updates” remained the same at 6%, whilst “entertainment” increased from 16% to 22%.

This was all well-reflected in people’s acquisition of new social media accounts; YouTube, perhaps the world’s greatest entertainment social media site (and the world’s most popular search engine) had the biggest jump in new account creations since the start of the pandemic, whilst social media sites used for connecting with others, such as Facebook and Twitter, had significantly smaller increases.

There was a jump of 14% to 22% of people using social media to catch up on the news vs. traditional TV channels.

Social media as a tool for all forms of media consumption:

4. Demographics, in particular generation, will have an impact:

Gen Z: Social media was the highest form of media consumed both before the pandemic and currently, however, this did reduce significantly from 62.5% to 43.8%. There was, by contrast, a big jump in film consumption (from 3.1% to 15.6%), and video game consumption almost doubled from 3.1% to 6.3%.

Millennials: Film was the highest form of media consumed both before and after the pandemic. Social media usage (second most used overall) decreased marginally from 26.7% to 22.2%. This marginal difference in time was otherwise spent on podcasts, books and video games.

Boomer: TV was the highest form of media consumed both before and after the pandemic with the second most-consumed form of media, radio, remaining the same. Newspaper/magazine consumption reduced by more than half (from 4.9% to 2.3%).

Overall, while every generation’s favourite form of media stayed the same, the pandemic saw them spending less time on those things and looking into other forms of media – seems like the pandemic was a real instigator for change in media consumption, regardless of age!

5. In the “new normal,” these changes are likely to remain for the long haul.

There were certainly a lot of responses that indicate that the pandemic has made some of people’s new media consumption habits permanent:

Conversely, some said that these changes might not stick around for the long haul, and that there are other factors involved:

What does this mean for the media industry? (Thoughts for the future)

This is just a snapshot of the incredible responses and insights you could see in your own media market research when you team up with Angelfish Fieldwork for participant recruitment!

In fact, we know just where to find the best participants for your study. So, whatever your media market research goals, you can be assured you’ll be in safe hands with us!

Simply get in touch with us to discuss your project, and we’ll be ready to get started!